Oradour - you must go.

But do make sure you have the right place. There are seven places called Oradour in France, but the one that is always followed by the words, "You must go", is Oradour sur Glane.

I can't remember when or how I first learned about Oradour. The place and the name seemed to seep into my consciousness independently and without my noticing properly. I'd heard there was somewhere worth visiting in the area, no more. The first conscious notice I took of the name was on a journey south along the A20 autoroute in the centre of France. As we approached Limoges I saw a large sign at the side of the road saying we needed to take junction 28 for Oradour, witness to 10 June 1944. Just before the end of World War II.

"What's that?" I wondered. Then just a few days later with the strange synchronicity of events that sometimes happens, when I was pottering around a second-hand bookshop I saw a book about the town - which I bought - and 24 hours later was told by a colleague,"You must go", that I had to go, that everyone should. So I did.

The town turns out to be nowhere near the motorway, in spite of its being so well signalled in advance. I travelled along increasingly rural roads until, suddenly, glimpses of ruined buildings through the trees. By now I knew it was a town destroyed during the war. 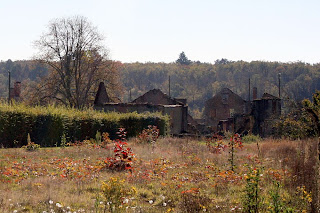 That must be it. I avoided the main visitor centre - I missed the turning - and finished up at the cemetery. From there I found a way into the site, not the normally encouraged entrance, but it was open nevertheless.

As I walked through the gates, it was like stepping into another world. Silence. A low and dark memorial over a crypt, long simple garden. Not what I was expecting at all. 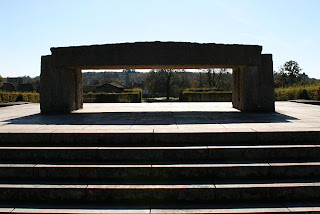 Looking back, I could see the cemetery and a further monument behind. 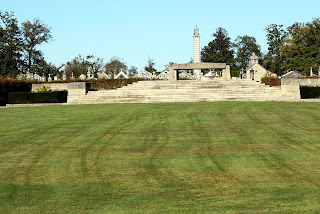 Moving on past the memorial, I arrived at the village green, surrounded by ruined buildings. Ruins everywhere, not a building intact. It could have been a film set. 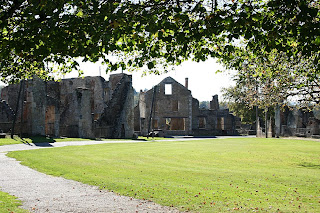 Walking further along the streets I could see more and more ruins, the crumbling and burnt walls, missing roofs, nevertheless not so very different from any other ruined buildings you see in rural France. 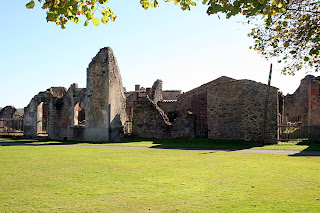 But a whole town. And each building is named: the butcher, the hairdresser, the forge, the shoemaker. A feeling of dismay grows and intensifies. 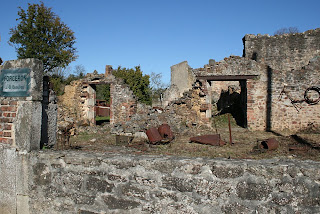 But it wasn't until I saw the personal items, the burnt out cars, the cycles, the sewing machine, the everyday parts of people's lives, that I felt the full impact. Real people lived here once.

And amongst all this were signs on the walls:

"The population was assembled on this square" 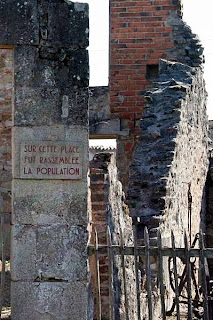 "This is a place of torture. A group of men were massacred and burnt by the Nazis. Reflect on this."
"Six men escaped from this barn" 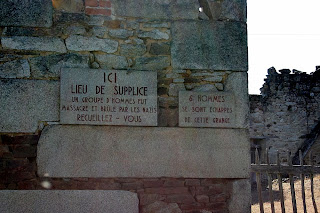 The church where the women and children were brought to be killed. I couldn't bring myself to go into the church. I felt I was intruding on an overwhelming sadness. And I was afraid I would hear voices. 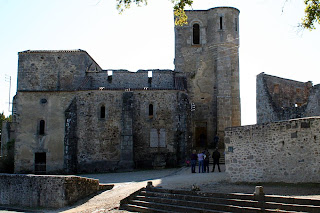 Back to the monument, underground. Inside artefacts found in the village: glasses, toys, money, and my first inkling of the enormity of it all: the names of every single person killed, large plaques on the walls listing the name and age of each person who died, including newly-born babies. 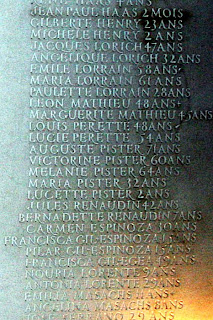 The events that caused this destruction started when German soldiers arrived just before 2:00 pm on Saturday 10th June 1944. The last soldier finally left on Sunday 11 June at 11:00 am. Less than 24 hours to destroy a town and its inhabitants. The town has been preserved in the state in which it was found. No rebuilding has been done, further deterioration is prevented. Oradour is exactly as those German soldiers left it.

I left the town the way I should have entered and saw the simple sign. "Remember". 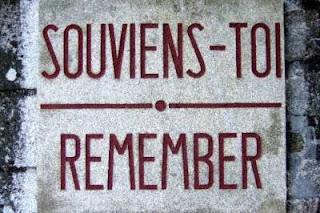